Black Widow Cast, Characters, Release Date and Everything Else You Wanted to Know

Is the new Black Widow a prequel? Where does it fall in the Marvel Universe timeline? All your questions answered and more.

In an alternate timeline, the release of Black Widow would have already come and gone. We would have spent the past month dissecting its characters, plot elements, and storylines to try and figure out what it all means within the vast configuration of the Marvel Cinematic Universe Phase 4.

Nonetheless, consistent with the theme of 2020, we will have to wait for the action-packed spy thriller from Marvel Studios. So what can we expect? Stick around to find out.

Scarlett Johansson is set to play Natasha Romanoff, aka Black Widow. She is set to join a star-studded cast including David Harbour, Florence Pugh, O-T Fagbenle, and Rachel Weisz.

Who Is the Red Guardian?

Stranger Things actor, David Harbour will play the role of Red Guardian, a sort of father-figure to Johansson’s character. According to an interview from TheWrap, Harbour describes Red Guardian as a type of redemption hero. He goes on to say, “he’s not the heroic, noble man you want him to be. He both comically and tragically has a lot of flaws.”

In the comics, the Avengers are the catalyst for a superhuman arms race between all the nations on Earth. The United States and Russia are the most competitive adversaries, which fits into the Cold War shtick of the Marvel Universe. The Red Guardian was initially created to rival Captain America.

Who Is the Taskmaster?

Another important character in the film is the Taskmaster. A villain who can pick up the fighting styles of other heroes quickly, just by watching and then mimicking their movements. Reports indicate that this role could be played by O-T Fagbenle, at least his Twitter feed seems to be hinting at that fact. A British actor, Fagbenle is most known for his role as Luke on The Handmaid’s Tale.

Notice the #TM? Most fans think this was a clear hint that he is playing the role of the Taskmaster. He has taken down this post on Twitter and removed the TM hashtag from his post on Instagram.

Who Is Black Widow’s Sister?

According to the Black Widow poster and trailer, it looks as though Florence Pugh will play the role of Yelena Belova, who looks to play a sister-like role in the movie. This scene, appearing to be from the third act, shows Yelena about to undergo an experimental procedure. In the comics, she is transformed into a Super-Adaptoid, perhaps this is a lead up to that story arc. 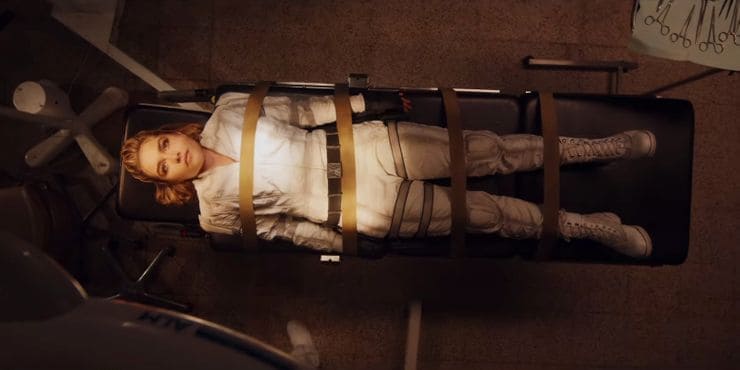 It doesn’t appear that Natasha will be passing over the role to Yelena in Black Widow, but it doesn’t mean it won’t happen in future films. In the comic books, Yelena is dedicated to the memory of Natasha, and even takes on the moniker of Black Widow herself after Natasha dies.

In the comic books, Yelena’s character doesn’t have close ties to the Russian Avengers, but the Red Widow does make an appearance. Perhaps the MCU has the idea to combine these two characters in the future as Natasha’s fate has already been concealed in Endgame.

Is Black Widow a Prequel?

The short answer to this question is yes. Black Widow is not coming back from the dead after Endgame. Instead, the story takes place in the past. According to an interview with IGN, David Harbour gave a deeper insight into the timeline of Black Widow’s journey in the prequel.

In the interview, he states that the timeline for the prequel is set between Captain America: Civil War and Avengers: Infinity War.

Black Widow is set just after Captain America: Civil War. Natasha must confront the darker parts of her past. She uncovers a conspiracy with ties to her past mistakes. She is pursued by a force that will stop at nothing to defeat her. Natasha must deal with her painful past as a spy and the fractured relationships she left behind long before becoming an Avenger.

Black Widow may be set to introduce the Winter Guard. Since the movie takes place after Captain America: Civil War would mean that the world has agreed to register superhumans under the Sokovia Accord. It would hardly surprise Black Widow fans to know that some governments were in violation of the Accords, and had set out covert missions to create their own Avenger-like teams.

If you give comic book enthusiasts extra time to fanboy over a film, you better believe they are going to come up with some theories about the movie based on the trailer. Here are a few theories that have been thrown out there.

Taskmaster Is Actually Melina in Disguise

One popular theory is that O-T Fagbenle is not actually Taskmaster, but rather Rachel Weisz character Melina is Taskmaster incognito. This would actually fit with the comic book story arc where Melina’s character is known as the Evil Iron Maiden. 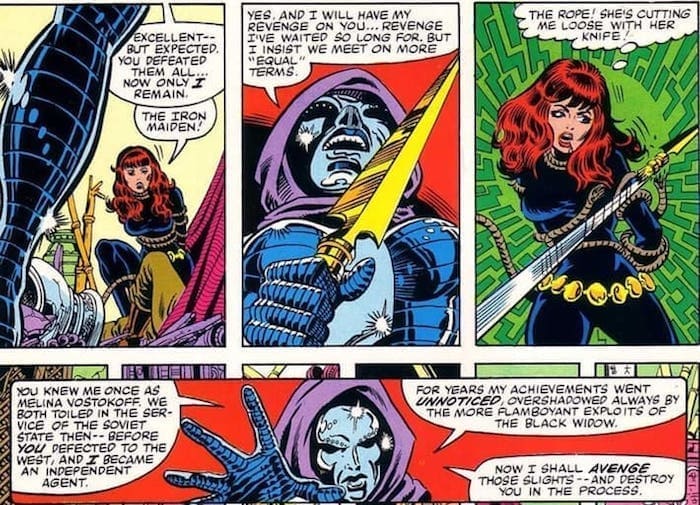 Another theory being thrown around is that it isn’t Melina at all, but rather not human at all, and is a Super Adaptoid. In the comics, Super Adaptoids were androids who were designed to replicate the power of the Avengers. They were so powerful that they could beat almost any superhero team. To defeat a Super Adaptoid took an unorthodox approach.

Are bells going off? I hope so!

You may have remembered that we mentioned that Yelena Belova is turned into a Super Adaptoid in the comics. In the trailer, you can see Yelena getting ready for some kind of procedure. You may also remember her copying many of Natasha’s moves, maybe this isn’t because they both trained in the Red Room, but rather because she is actually an adaptoid.

You also notice in the trailer that Taskmaster uses many moves of other Avengers. Perhaps this is the reason. We’ll have to see.

Taskmaster’s Has a Vibranium Hook-Up

You may notice in the trailer that Taskmaster appears to have Black Panther’s vibranium-like claws. He (or she) also appears to have a very powerful shield, just like Captain America.

One theory is that Taskmaster may have ties to Wakanda or perhaps may have scored it from Ulysses Klaue. You’ll remember that Ulysses Klaue is a criminal who was trying to sell off pieces of vibranium he stole from Wakanda a long time ago.

The new official release date is set for November 6, 2020. This was actually the release date for what was to be the next movie in the MCU Phase 4, Eternals. The date for Eternals has been pushed back as a result of Black Widow’s new release date.

Comic fans in America should be leary about social media the week before November 6, as Black Widow is set to release a week earlier in the UK.

Be sure to check back on our blog regularly for more information on this topic.